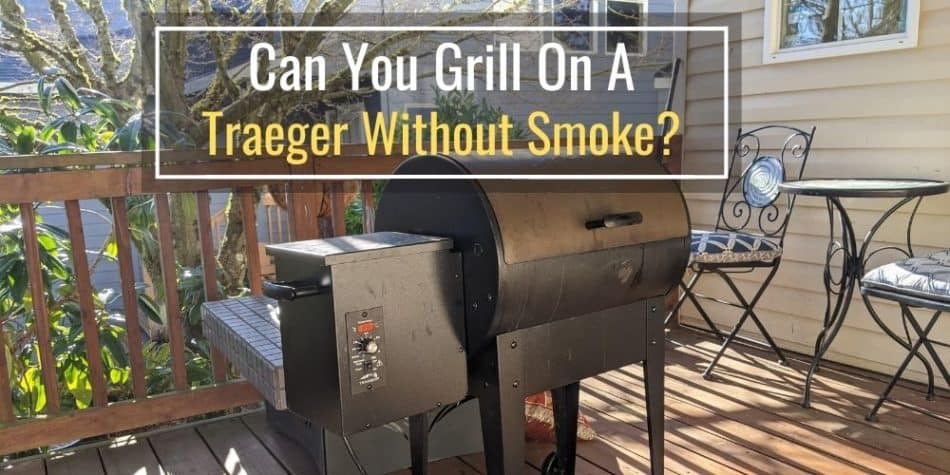 So you’ve got a Traeger pellet grill and you’re loving the smoke flavor and smells on your meats and veggies. If you’re like me – you’ve probably smoked just about every possible meat and veggie you can get your hands on.

But what happens when you come across a dessert or pizza recipe?

Smoked cookies or pizzas sound interesting… but not necessarily tasty.

Dessert or pizza recipes typically call for higher temperatures without all the smoke.

So can you grill on a Traeger without smoke?

So it is possible to grill on a Traeger pellet grill without smoke as long as the temperature is cranked up.

Keep in mind that there will be a little bit of smoke but the food will cook quickly which means it will not be exposed to much smoke. Not to mention a higher temperature setting on the Traeger will not produce as much smoke as a lower temperature will.

Before you crank the temperature of your Traeger to 350°F or the “High” setting – I highly recommend that you clean your grill.

It is fairly common for grease fires to start if your drip tray is full of grease or if your grill’s barrel is full of excess dust.

In the photo below, you can see that my drip tray is full of grease from the ribs I just smoked. This grease is fine if you plan on smoking more things at lower temperatures such as 180°F or 225°F.

However, this grease can and will ignite when the grease reaches around 450°F.

Keep in mind even if you set your Traeger to 350°F, that the temperature may rise to 450°F due to a few factors such as how often the lid is opened, ambient air temperature, and the p-setting on your grill.

Follow this guide to thoroughly clean your Traeger including the drip tray and firepot. It only takes about 10 minutes and can help prevent a grease fire. Not to mention it’s just good practice to keep your Traeger relatively clean.

How Hot A Traeger Grill Gets On High

Traeger pellet grills will get as hot as 450°F on the high-temperature setting.

However, a Traeger can briefly reach higher temperatures if the air temperature is warm, the grill is placed in the sun, or if the pellets are rapidly being fed into the firepot.

Keep in mind that grease and oils can ignite around 450°F so make sure to clean the drip tray and grill before setting the temperature on a Traeger to high.

Traegers and other pellet grills are known for the smoky flavor and smoke rings that develop on meat when left to smoke at low temperatures for long periods of time.

For example, a brisket left to smoke on a Traeger at 225°F for 6 hours will develop a smoke flavor.

However, food cooked or grilled on a Traeger at a higher temperature such as 350°F or the high setting will not taste like smoke.

The less time food is sitting in a Traeger means the less smoky it will taste.

How To Grill On A Pellet Grill

The major difference is that the lid should always be closed on a pellet grill after the food is placed on the grill.

Unlike charcoal or propane grills, the heat is indirect from a pellet grill which means the lid needs to be closed to maintain cooking temperatures.

So if you are cooking burgers or steaks then following these general steps when grilling on a pellet grill:

Searing Food On A Pellet Grill

Searing on a pellet grill is possible as long as the temperature is set to high or 450°F and given about 10 minutes to warm up. See this searing guide for pellet grills to see how to properly sear your meat.

First, make sure to smoke your meat or food so that the internal temperature has reached the desired temp. Searing should be the final step in a Traeger since it takes some time to heat up and cool down a pellet grill.

After the food reaches your desired internal temp, remove the food from the grill and place it in a warming drawer.

Set the Traeger’s temperature to high and wait 10 minutes for the grill to heat up.

Next, place the meat or food back onto the grill and sear both sides. The grill’s lid can be open while you sear the food since the grill grate will be hot.

Remove the seared food from the Traeger and place the grill on the Shut Down Cycle so that it can properly cool down.

Q: Can you cook burgers on a pellet grill?

A: Burgers can be cooked on a pellet grill through smoking at 225°F or grilling at a higher temperature such as 450°F. Pellet grills are versatile and can smoke, grill, and sear food based on the cooking temperature.

Q: Can you grill quickly on a Traeger?

A: Food can be grilled quickly on a Traeger that has been set to a high temperature such as 450°F. In fact, steaks can be seared on a Traeger set at 450°F for 2-3 minutes on each side. Ultimately, the temperature setting is what will determine the cooking time.

Q: Can you use a Traeger as a normal grill?

A: Traeger pellet grills can be used as normal grills for grilling burgers, searing steaks, and cooking any other food. All pellet grills need 10 to 15 minutes to thoroughly preheat before placing food onto the grill and the lid should remain closed the entire time. Otherwise, a Traeger can be used just like a normal propane or charcoal grill.

Q: Do you flip meat on a pellet grill?

Q: How long does it take to grill on a pellet grill?

A: Food can be grilled as quickly as 10 minutes on a pellet grill at higher temperatures such as 450°F and as long as 14 hours for a brisket being smoked at 225°F. Pellets grills are versatile so the cooking temperature will control how long it takes food to cook.

Although most commonly used for smoking, Traegers can be used for other forms of cooking as long as the grill is set to the right temperature.

I used to bring smoked meat inside and sear it on the stovetop but now I just crank the Traeger’s temperature setting to high and give my food a nice sear before bringing it inside.

Traegers are great grills that can be used to smoke ribs, grill hotdogs, cook pizzas, and bake cookies. You just need to place the Traeger on the correct temperature setting for the food you’re cooking.

link to How Long Do Pellet Grills Last? (Answered)

Pellet grills are becoming increasingly popular with home BBQ enthusiasts for their versatility and convenience. After all, what other cooking machine can smoke a brisket and then bake a pie? Not...

Continue Reading
link to Do Pellet Grills and Smokers Dry Out Meat? (Explained)

When using a pellet grill, I often get asked if a pellet grill dries out the meat while cooking it. After all, pellet grills can smoke a brisket for 12 hours so a lot of curious BBQers want to...