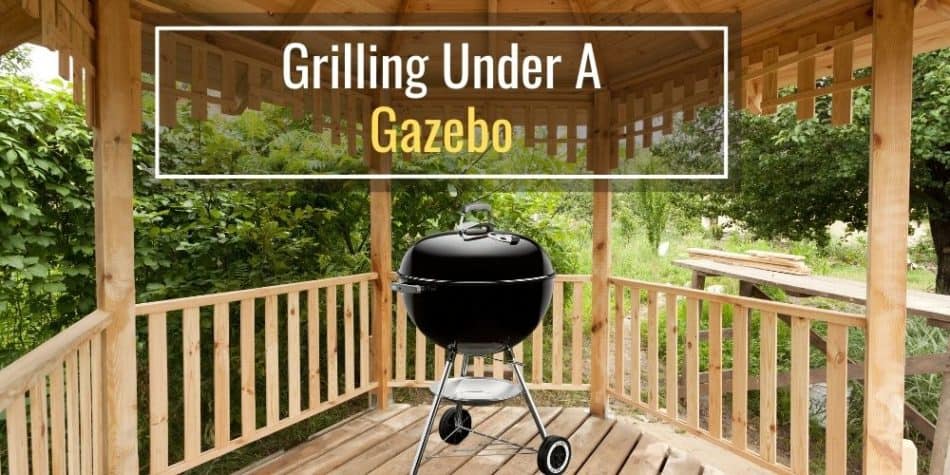 In summer, most people prefer spending most of the time outside. Besides engaging in outdoor activities like swimming and hiking, grilling is a great way to spend time with loved ones.

The peak months to grill are May, June, July, and August. However, you can grill whenever you feel like provided you have a covered space and follow a few precautionary measures.

During the offseason, it is possible to grill even when it’s raining as long as your grill is partially covered from the harsh weather.

A question I often hear is if a grill can be safely used under a gazebo?

A grill can be placed under a gazebo as long as there is sufficient airflow and the hot air has enough space to cool before hitting the gazebo. Generally, grill manufacturers recommend 3 to 10 feet of space from the grill to the nearest object including railings.

Keep in mind that different grill manufacturers and types of grills will recommend different safety clearances. So make sure to check with the manufacturer’s safety instructions.

Let’s cover some factors to keep in mind when placing a grill under a gazebo.

Safety Measures To Follow When Grilling Under A Gazebo

Before grilling under a gazebo, make sure to check the following factors.

The grill should be kept away from any combustible objects including the railing of the gazebo.

BBQ grills will get hot and give off a lot of heat. Over time, this heat will dry out plants and other combustible objects which can eventually lead to a fire.

Not to mention, gazebos that are made of synthetic materials will start to warp and melt if exposed to high heat.

Generally, a grill should be placed at least 3 feet away from the walls and railings.

Another factor to keep in mind is the vertical clearance between the grill and the ceiling of the gazebo.

The hot air needs enough space to safely cool down and exit the gazebo.

Generally, grills should have at least 10 feet of vertical clearance so that the hot air can cool down before touching the ceiling.

If the gazebo is short and does not have enough clearance than do not place a grill under the short gazebo.

Over time, the hot air can damage the gazebo’s ceiling if there is not enough clearance.

Even if there is enough vertical clearance, the gazebo’s ceiling may get discolored from the grease and smoke from the BBQ grill. However, this will usually just be a cosmetic issue that can be cleaned off.

Grills produce heat and smoke which need to be safely vented away from the grill.

Most gazebos have vents in the ceiling to allow hot air to exit so make sure your gazebo has these vents otherwise hot air will accumulate inside the gazebo.

Not to mention grills produce carbon monoxide which is why grills cannot be used indoors or in enclosed spaces like garages.

So make sure the gazebo has good airflow so that the heat and smoke can safely vent away from the grill.

Another factor to keep in mind is the material of the gazebo and the gazebo floor.

If the gazebo is made of wood or other materials that can be combustible then it is recommended to insulate the gazebo’s floor from the grill.

BBQ grills can have grease splatter and hot embers that can land near the base of the grill. The grease and hot embers can damage and even ignite combustible material if left unattended.

Grill mats can be purchased from any department store or on Amazon and simply get placed underneath the grill.

As seen in the image above, the grill will now be insulated away from the gazebo floor so that the heat from the grill does not damage the floor.

I highly recommend getting a grill mat if you plan on grilling on top of an area that you do not want to get stained from grease or damaged from embers.

Safety Tips For Grilling Under A Gazebo

When grilling under a gazebo, it’s crucial to take the necessary steps to ensure your safety.

Here are some safety tips to keep in mind when grilling under a gazebo.

First and foremost, take all the fire safety precautions when grilling under a gazebo.

Make sure you have a fire extinguisher or garden hose within reach at all times when grilling. Although grills have been designed to be safer, all it takes is one time for a catastrophic event to happen.

2. Keep Children And Pets Away From The Grill

This one is pretty self-explanatory – grills get hot, and the last thing you want is for your loved ones to get hurt while you’re trying to enjoy a barbecue.

Even more dangerous is when the grill is sitting on top of a wooden deck or close to combustible materials. Kids and pets are great but we want to ensure that the grill does not get knocked over.

So keep the kiddos and pets away from the grill.

3. Do Not Leave The Grill Unattended

This is another rule that applies to grilling in general and not just when you’re using your grill under a gazebo.

Never leave your grill unattended especially when there are fatty foods such as steaks, burgers, and other meats on the grill.

Flare-ups can quickly lead to uncontrolled grill fires. So make sure to at least keep an eye on the grill if you need to step away.

4. Do Not Use Defective Grills

If you notice that something is wrong with your grill (e.g. faulty heat distribution, broken ignition), then don’t risk using it on a covered deck. It’s better to put off your barbecue until you get the problem fixed than take the risk of causing an accident.

If it’s a problem that you can fix on your own, by all means, give it a go.

5. Use Steady And Lower Heat

Generally, gas grills do not have issues of producing too much heat so most gas grills are safer to use under a gazebo than a charcoal grill.

When firing up a charcoal grill, be careful if you decide to use lighter fluid. Creating a large fire, even if the fire is sitting inside of the grill, can be problematic when the large fire is underneath a gazebo.

Ideally, you want to use a low and controlled heat source so that the gazebo is not exposed to high heat even for just a moment.

So avoid using lighter fluids or anything that can create a big flame.

When it comes to grilling under a gazebo, safety is a serious factor to consider before firing up the grill.

Gazebos add a new element of risk that should be thought through.

Generally, grills need to be kept 3 to 10 feet away from combustible objects such as railings and plants. Grills also need about 10 feet of vertical clearance so that the heat and smoke can safely exit the grill before touching the gazebo ceiling.

As long as the grill is placed in a safe area that is far enough away from combustible objects then the grill will be safe to use under the gazebo.

Keep in mind if you start to notice damage to the gazebo, shut off the grill immediately.

However, grilling under a gazebo is possible when the right safety precautions are taken.

link to Can You Soak Wood Chips TOO Long? (Explained)

So you're planning to add some wood chips to the grill to create that perfect smoky flavor when you start to think about soaking your wood chips. Some guides recommend soaking wood chips for 30...

When shopping for pellet grills, there are a ton of different options on the market. With different brands, sizes, and features, it can be daunting to figure out where to even begin. Not to...