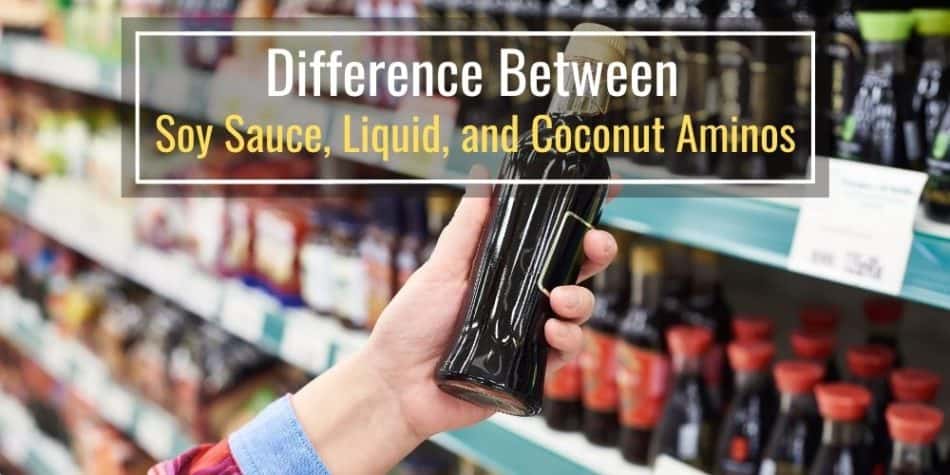 We’ve all been there – you’re following a recipe and it calls for soy sauce, liquid aminos, or coconut aminos.

You go to the store and try to find these things and start wondering what’s the difference and can we just substitute one for the other?

Are there any reasons to choose liquid aminos or coconut aminos over soy sauce?

So when selecting between soy sauce, liquid aminos, and coconut aminos, it really comes down to personal preference, budget, and dietary restrictions.

Soy sauce, liquid aminos, and coconut aminos all add umami to any dish you cook and they all have varying levels of sodium.

Let’s cover the main differences below that will help you decide between soy sauce, liquid aminos, and coconut aminos.

What Are Liquid Aminos

Liquid aminos are the concentrated amino acids extracted from soybeans. Soybeans are treated with an acidic solution and the amino acids are derived.

The Difference Between Liquid Aminos And Soy Sauce

Both liquid aminos and soy sauce are made from soybeans.

Liquid aminos on the other hand are the concentrated amino acids extracted from soybeans. They are not fermented, and they do not contain wheat.

Liquid aminos are a little less salty than soy sauce and a great alternative for anyone who requires a gluten-free seasoning sauce.

The Difference Between Liquid Aminos And Coconut Aminos

Coconut aminos are even lower in sodium than liquid aminos, so they are a great alternative for anyone monitoring their sodium intake.

Essentially, these ingredients bring umami to a dish; it’s the savory quality that helps add layers of flavor to your meal.

Tamari is made from fermented soybeans and tastes pretty similar to liquid aminos.

Tamari is a little darker and richer and usually does not contain wheat. However, some producers do use a little wheat so read the label if you require a gluten-free option.

Fish sauce is made from fermented fish, such as anchovies.

Fish sauce is higher in sodium than liquid aminos so it should be used more sparingly. However, fish sauce is also soy-free and usually gluten-free (but read the label, because some American producers add wheat during fermentation).

A couple of anchovies add a ton of umami to a dish without overpowering all the other flavors.

Anchovies are gluten-free and soy-free, as you would expect.

Worcestershire sauce is made of vinegar and fermented anchovies along with a few other seasonings and spices.

Worcestershire sauce is gluten-free, but it is not soy free. There are a few undisclosed “natural ingredients.” While these ingredients are not disclosed on the label, it is said that small amounts of soy sauce is included in the recipe.

Liquid aminos are a great addition to a marinade because it helps with the tenderizing process while also adding a lot of flavor.

Liquid aminos are vegan and gluten-free, so it is a great option for anyone with specific dietary requirements.

Liquid aminos have been marketed as a healthy alternative to soy sauce given the protein content and relatively lower sodium content. That being said, it is debatable whether or not liquid aminos are actually healthier than the alternatives.

There are no carbs in liquid aminos which makes it a keto-friendly sauce as seen from the nutrition facts of Bragg’s Liquid Aminos.

Liquid aminos contain soy and are not soy-free. Coconut aminos on the other hand are soy free.

Liquid aminos are the concentrated amino acids extracted from soybeans. The soybeans are treated with an acidic solution and the amino acids are derived for liquid aminos.

Liquid aminos do expire. Generally liquid aminos last between 3 and 5 years but you should follow the expiration date that is printed on the bottle.

How To Store Liquid Aminos

Soy sauce, liquid aminos, and coconut aminos are all fairly interchangeable within recipes. There are varying levels of sodium in each of these condiments which may be worthy of your consideration along with any dietary restrictions on soy and gluten. However, each of these seasoning sauces add a lot of umami and flavor.

Make sure to grab your favorite soy sauce, liquid aminos, or coconut aminos bottle and give your recipe a healthy splash. You will not be disappointed!

link to Why Did My Pellet Grill Catch On Fire? (Explained)

A pellet grill is an excellent cooking tool since you can smoke, grill, sear, and even bake food on a pellet grill. However, as with any appliance, there is always a chance something might go...

When it comes to outdoor cooking, the market has expanded to a point where there are almost too many options available. In the past, picking a grill meant choosing between a handful of brands as...